Meeting the Malas Twins and Nada

Claudia Ruff Posted on 26/03/2013 Veröffentlicht in english, GET ACTIVE, get in touch 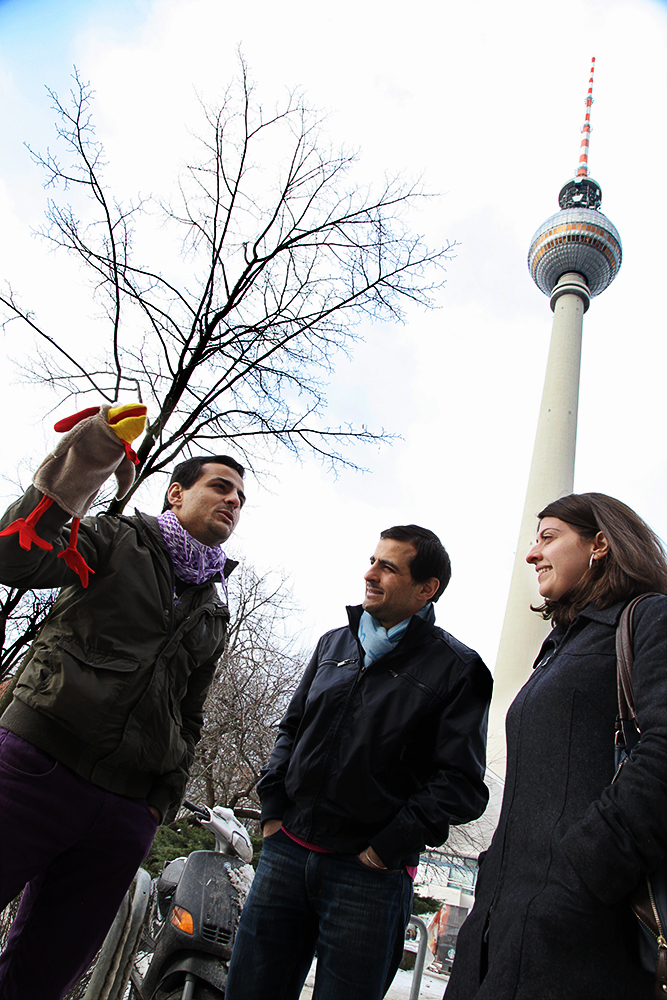 Some days ago Berlin was welcoming very famous artists from Syria, known not only for their humor but also for being supporters of the revolution: the Malas twins. They came here for a film shooting for the movie project Syria Inside, the movie Tamer Alawam was working on before he died in Aleppo.

Together with the Malas twins came Nada, Mohammad’s wife. They met in Syria before the revolution started and fell in love with each other, Nada being Alawite, Mohammad being Sunni. This combination doesn’t make them special, on the contrary, that is what Syria always stood for: the living together of different groups, be it religious or ethnic. Nada comes from a typical Alawite family, from a remote area, making their living as farmers.

She explained clearly, that the Assads, father and son, did not serve the Alawite group, they exploited them as well. While offering them new careers in the army, they were playing with their fears: you are a minority, the Sunnis are just waiting for an opportunity to kill the Alawites and all the other minorities. In nourishing this fear the Assads were instrumentalizing them and forcing them to be loyal in all aspects. But on the other side Nada stated clearly, that there were no benefits for the Alawites as such, no hospitals were built in their areas, no improvements in infrastructure or education were made. On the contrary, especially Alawites being against Assad were punished very hard, stating that they would betray not only Syria, but the Alawites and that for the Assads personally as well.

After the Malas twins had to escape one and a half year ago, the moment they were searched for by the secret police, Nada and Mohammad thought for a long time that they would meet again in Syria, finally get married and live a happy life in a free Syria. But half a year ago Nada was threatened to be imprisoned as well and decided to join Mohammad and Ahmed in exile. Since then the three did not stop their dedication for a free Syria but try to draw more attention on the cause also in foreign countries.

Meeting the Malas Twins and Nada

We are very happy that we’ve had the opportunity to speak with them and make this very personal interview. We wish Nada and the Malas twins success in all their efforts and very soon a happy life in a free Syria!

Watch here the first part of the interview, speaking about their escape, Tamer Alawam and their memories of Syria:

And here the second part of the interview about the hopes for an end of the war: