Review of a demonstration in Berlin 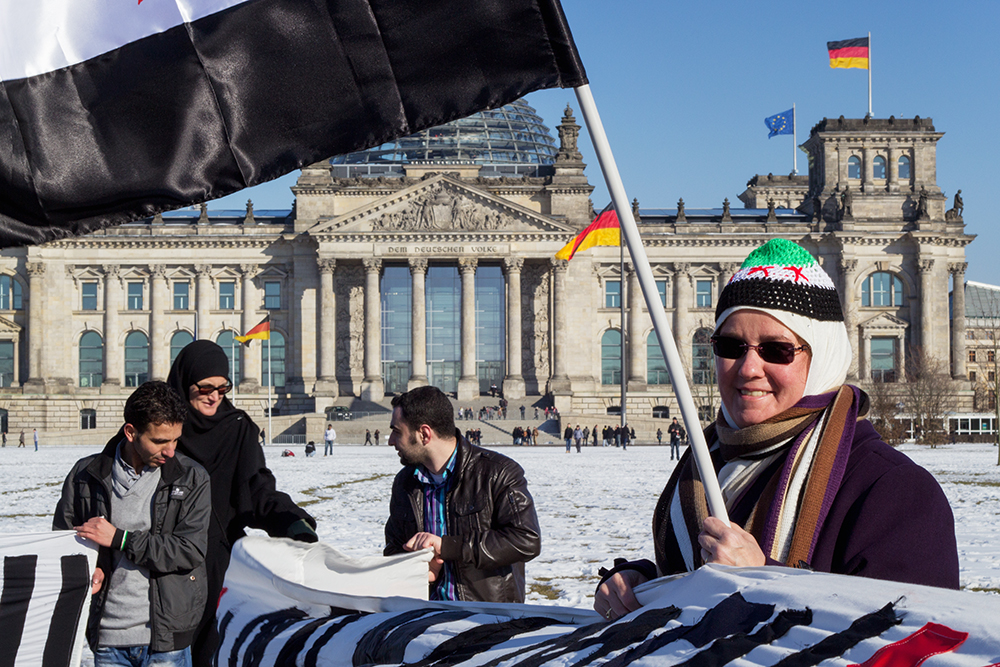 Two years ago the Syrian Revolution started in Dara’a, a small town in the south west, sparked by the citizens who went on the street to demonstrate after schoolchildren were tortured by the secret service for an anti-government graffiti.
In the last days, there have been many events and demonstrations around to world to show solidarity with the Syrian Revolution. We from Action Syria decided to go to a demonstration in Berlin on the 16th. The starting point was the Alexanderplatz, where we’ve met after bumping into a counter protest from regime supporters. We couldn’t believe that there were still people proudly holding pictures of Bashar al-Assad, telling lies about a religious war and trying to get unacknowledged passengers on their side by fuelling islamophobic thoughts.
After this unpleasant incident and with a lot of anger build up, it was a relief to see the first green, white and black flags with the three red stars. The symbol of a free Syria.
People were slowly gathering together, organizing the big banners with the word „freedom“ written in many languages. International solidarity – that was the key word under which we started our walk.
Unfortunately, there weren’t as many people as we thought there would be. About 100 to 150 protesters where around us but we still managed to be loud enough to make passengers stop, taking out a camera, reading the signs. „Assad, Assad du Idiot, wegen dir sind Kinder tot“ (Assad you idiot, kids are dead because of you) was one of the many german slogans shouted out while passing all the Embassies on our way to the German Parliament.
A bigger stop was made at the Russian Embassy. „Russland finanziert, Assad bombardiert“ (Russia finances, Assad bombs) was everybody screaming while the Russian flag on this big building was just across the street.
Every so often there was a recording played. A young women gave a short summary of the last two years, starting with the events in Dara’a, explaining how funerals turned into demonstrations and demonstrations into funerals, ending with the brutal truth of more than 80.000 dead bodies, more than a million civilians fleeing their country and finally more than 2,5 millions without a roof over their head and almost nothing to live of in Syria. And in the end with one request for all the people passing us: just don’t look away, show solidarity!
Shortly before the end, while we were just passing the Parliament, a young man grasped the microphone, reacting to a statement made by the German Foreign Minister Westerwelle: „…after two years, every day a hundred of our finest and young men and children die but what they care about is the stability of the middle east. Nobody cares about the lives of hundreds. 80.000 people dead and nobody yet cares. What matters: Stabilität (stability). So thank you, I don’t understand the western values.“
Shortly after this the demonstration was over, ending with some speeches, free candy and hot drinks.
We can simple hope, that our request for international solidarity was heard, that next time more people will show up to stand for their believes, to fight for freedom and human rights. Silence is killing people and our own history showed us, that the fight for freedom is possible to win, why look away this time?