↓ Zum zentralen Inhalt
Home › english/">english › Who is this FSA?

Who is this FSA? 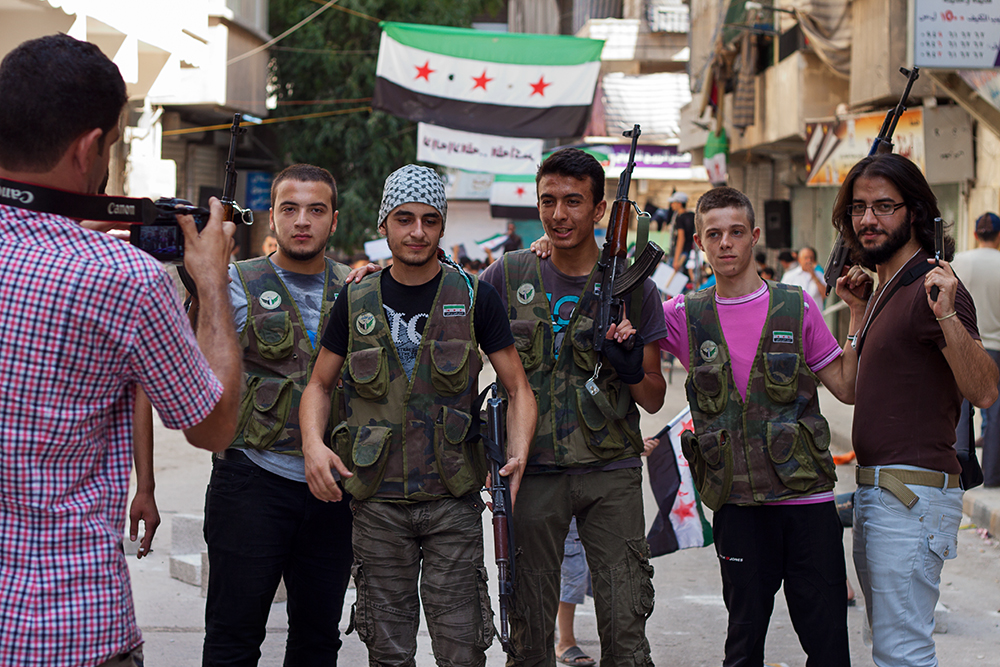 Who are these rebels? Are they all just dangerous extremists and terrorists fighting for a religious state? We say: no. United in the wish to overcome Assad’s regime, the FSA is a fairly free organised bunch of battalions of different colours and shapes: some groups are not bigger than 10 members, others are large and well connected in different cities. Some members are driven by a religious background, others come from a civil approach and are fighting for a free Syria for everybody living on its ground, no matter to which religious belief or which ethnic group one belongs. Some are defected soldiers, others are former civilians, from shoemakers to office employees, who grabbed guns in order to defend themselves, their families, their friends, their country.

The story of the Free Syrian Army started in late spring 2011. Soldiers of the regular Syrian Army defected, refusing to shoot at peacefully demonstrating people. As more and more soldiers defected, there was a need to organise themselves. On July 29 a group of seven defectors led by Riad Al Asaad announced the foundation of the FSA, the Free Syrian Army, having its headquarter in a refugee camp on the border with Turkey. Their own definition states:

“We declare that we do not have any hidden or political Agendas, and that we are under no circumstances liable, controlled, and headed or representing any ethnic, sectarian, or religious power groups. We are just defected soldiers and officers of the Regular Syrian Armed Forces who have gathered to defend and liberate Syria and the Syrians from the tyranny of the Regime, so that the killing of innocents and bloodshed will stop. We also declare that it will be our job to gather, control and regulate the manner in which any weapons is or are acquired, sold, bought, possessed and used now and in the future freed Syria. We also declare hereby that we will go back and resume our natural life, be it at home or in the military, once the armed conflict, caused by Al-Assad Military Forces and Militia, is resolved.”
(http://www.free-syrian-army.com/en/about-us/)

So while the regime started the violence and pushed the opposition into armed resistance, this armed resistance was started by defected soldiers, who did precisely what people revolting peacefully in a violent dictatorship demand from soldiers: refusing the firing order and taking the side of the people – instead of the ruling clique. In place of a strict hierarchical structure the FSA became an incoherent and growing group of different armed battalions, fighting rather independently with strategies according to their specific setting. Additionally there always was some controversy about the authority within the leadership, but also about it being in Turkey. The FSA would grow in size to about 20.000 by December 2011, to an estimated 40.000 by June 2012 and 60.000 by the end of 2012.

In the beginning the task of the FSA was protecting peaceful demonstrations. After a while, guerrilla fighting 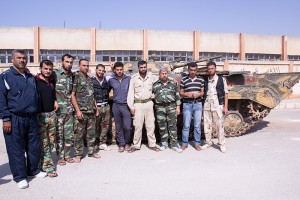 started although the battalions of different sizes were often confronted with a lack of weapons, munition and communication gear. Support came from different sides, among them Saudi Arabia, Qatar and Turkey. The term “war” was first used officially by Assad by the end of June 2012 – in fact applying to a situation starting in early spring 2012: the opposition was better equipped than before and gained ground. Tanks were destroyed, helicopters shot down, Shabiha and soldiers were captured. They could move quite freely in the north western provinces Idlib, Aleppo, Homs and Hama, so that support could be organised easily via Turkey and Lebanon. Fighting took off in Damascus and Aleppo in July that year and showed that Assad’s troops can’t control all the major cities at the same time. The regime withdrew from some major key positions and relied more and more on its air power and artillery. The FSA on the other hand changed their tactics too and started attacking successfully with some antiaircraft weapons and capturing several military bases.

The regime’s newest answer are Scuds, not known for their precision, but giving the possibility to attack from a 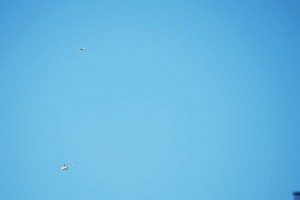 safe distance, recklessly endorsing the death of many civilians. In the beginning of December 2012 the Scuds were first fired from the An Nasiriyah Air Base, north of Damascus, targeting the Sheikh Suleiman base north of Aleppo, which a mujaheddin group had occupied in November 2012.

Taking this as an example, who is part of the FSA after all, who is not? Fighters from the main rebel Free Syrian Army did not take part in the battle for Sheikh Suleiman. Only a small FSA group in nearby villages monitored the battle through binoculars. “The Islamists caught us unawares by launching an attack on their own against the base on Saturday night,” said an FSA fighter. “They were quicker than us.” Fighters hoisted a trademark black jihadist flag over one of the buildings they captured. The militants refused to say which group they belong to, and Abu Talha, their leader, barred combatants from other factions from entering the combat zone. (http://yallasouriya.wordpress.com/2012/12/09/jihadis-grab-sheik-suleiman-base-aleppo-syria-http/)
So while many Syrian fighters consider the Nusra Front and other fundamentalist groups a key ally because of its fighters’ bravery and reliable supply of money and arms, these groups haven’t been part of the FSA. Another example shows this clearly: In July 2012 two European journalists were captured near the border to Turkey by foreign jihadis. “I don’t think there was one Syrian among them,” one of the Journalists said. After one week in a tent camp they heard a group of men come in. “They were shouting at everyone, saying, ‘How long has this been going on; this is outrageous,’ yelling at the jihadis, and then they told us, ‘You are free.’ Our hearts leapt, of course.” Their rescuers were fighters from the Free Syrian Army. They fired into the air during the rescue but more as a show of force to intimidate the jihadists, rather than as part of a firefight, he said. Both journalists were escorted back across the border to Turkey. (http://www.nytimes.com/2012/07/28/world/middleeast/jeroen-oerlemans-john-cantile-two-journalists-freed-by-islamic-fighters-in-syria-after-weeklong-ordeal.html)

Besides fighting the state’s army, the FSA also took over police tasks in liberated areas in accordance with the civil part of the opposition. Checkpoints are serviced, houses and the belongings of civilians who left are protected, help for residents and refugees without means are organized, disputes are settled in “complaint centers”.

But evidence is given as well that detainees by the FSA have been subject to ill-treatment and torture and that extrajudicial or summary executions in Aleppo, Latakia, and Idlib were comitted. While video footage published on YouTube often enough emerged being part of the propaganda war, objective proof has been found by Human Rights Watch in interviewing prisoners: “Six of 12 detainees interviewed by Human Rights Watch in two opposition-run detention facilities said that FSA fighters and officials in charge of detention facilities had tortured and mistreated them, in particular by beating them on the soles of their feet.”

Human Rights Watch was told by the head of the Revolutionary Council of Aleppo that the authorities don`t execute or torture suspects nor prisoners, but that “beating detainees on the soles of the feet was “permissible” because it did not cause injuries. When Human Rights Watch explained that beating on the soles of the feet constitutes torture and is unlawful according to international law, he said that he would provide new instructions to FSA fighters and those in charge of detention facilities that such beating was not permitted.”

“Time and again Syria’s opposition has told us that it is fighting against the government because of its abhorrent human rights violations,” Nadim Houry, deputy Middle East director at Human Rights Watch, said. “Now is the time for the opposition to show that they really mean what they say.” (http://www.hrw.org/news/2012/09/17/syria-end-opposition-use-torture-executions)

In December 2012 the Unified Military Command with 30 members was established to unify those battalions who commit themselves to a code of conduct, including international human rights law and international humanitarian law. This means that the FSA not only officially and clearly draws a line between itself and groups with different interests like Jabhat al-Nusra, but also ties itself once again to the civil opposition.