Action Syria Posted on 28/01/2013 Veröffentlicht in english, SYRIA, the revolution 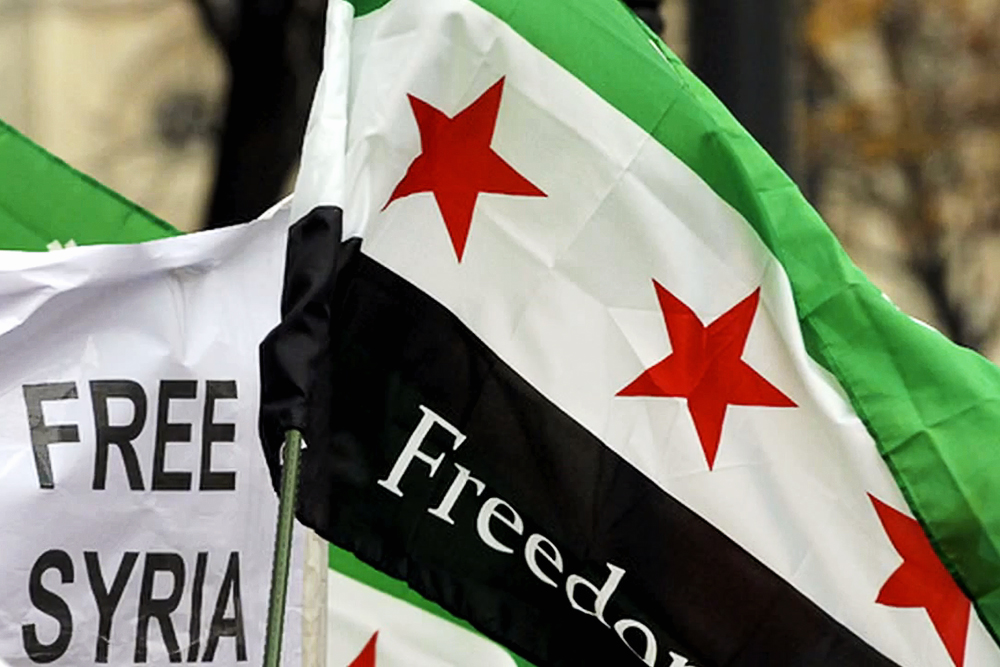 When the protests erupted in March 2011 the greatest challenge to nearly five decades of Assad family rule was posed. Since 1963 Syria has been a one-party state. The citizen could only approve the President and could not vote in multiparty elections for the legislature. From 1970 to 2000 the party was led by Hafez al-Assad, who facilitated the group his family belonged to, the Alawis, a Shiite minority in a mostly Sunni country, going also against the ideal of the Party itself.
In the year 2000 his son Bashar al-Assad came to power as leader of  the Ba’ath party,  the dominant political authority in Syria.  When he succeeded his father was appointed after a constitutional amendment lowered the age requirement for President from 40 to his age of 34.

During the regime of al-Assad (father and son) any other form of opposition was suppressed, from the political to the ideological and artistic others. Everything was considered against the regime was punished. A large number of Syrians were arrested,  jailed and tortured just because outside of the lines of the dictatorship. People didn’t have freedom of thought.

Even before the uprising began, the Syrian authorities have always responded to anti-government protests with military force. What is formally called a Republic was far away from the idea of the “res publica” the word means in itself.
The last outburst of discontent before the Revolution started had come in 1982, when the Sunni Islamist community, including the Muslim Brotherhood, Salafists and others rose up in the city of Hama. The answer of Hafez al-Assad was to send troops to kill a number of people estimated between at least 10.000 to 35.000 and smash the old city (The Hama massacre). Hundreds of rioters were jailed, many never seen alive again. Anyway the vast majority of the victims were civilians.
However it was not possible to repress the revolts that started in 2011. The demonstrations became a revolution that degenerated into a war still going on to overthrow the regime.

Syria’s “Arab Spring”: why and how did the protest start

The Syrian Spring was characterized by nationwide demonstrations as part of the large protest movement known as the Arab Spring.
The events started in March 2011 in the southern  city of Deraa, after the arrests of at least 15 children for painting anti-government graffiti on the walls of a school that said: “The people want the fall of the regime”.
Large protests started in Hama (till the 1 July when there took place the largest demonstration against the president, with more than 400,000 demonstrators). Than protests spread rapidly throughout the country. People took to the streets spontaneously and peacefully. The demonstrators were asking political freedom  and the end to the 48-year-old emergency law that deprived the citizens from their rights, imposing restrictions on the freedom to assemble and move and allows the arrest of “suspects or persons who threaten security”. These laws also allowed the government to interrogate, monitor communications and carry out preliminary checks on the news spread by any kind of media, from newspapers to internet.
The Assad regime’s response included promises of reforms but also brutal suppression of protests. The police often responded to the protests violently. At this point demonstrators started to demand the resignation ofPresident Bashar al-Assad and the end to Ba’ath Party rule. In different situations the police opened fire on the unarmed crowd and in May Army tanks entered Deraa, Banyas, Homs and suburbs of Damascus in an effort to crush anti-regime protests.

After months of military sieges, the protests evolved into an armed rebellion. Defected soldiers and civilian volunteers organized opposition forces. The regime labeled them as “armed terrorist groups and foreign mercenaries”.
Besides the unarmed protest of civilians continued in different Syrian cities and with them the arrests of many of the protesters, jailed and often torturedsimply for having expressed their discontent. Many of them were also killed during the demonstrations, especially on those that took place on Fridays after the communal prayers in different cities, when Syrian used to protest against the regime that violently suppressed the revolt. The numerous Fridays of blood in the years 2011 and 2012 marked the memory of the Syrian people. Only in 2011 at least 3.500 protesters were killed and thousand detained, including children under the age of 18, according to HRW (Human Rights Watch).