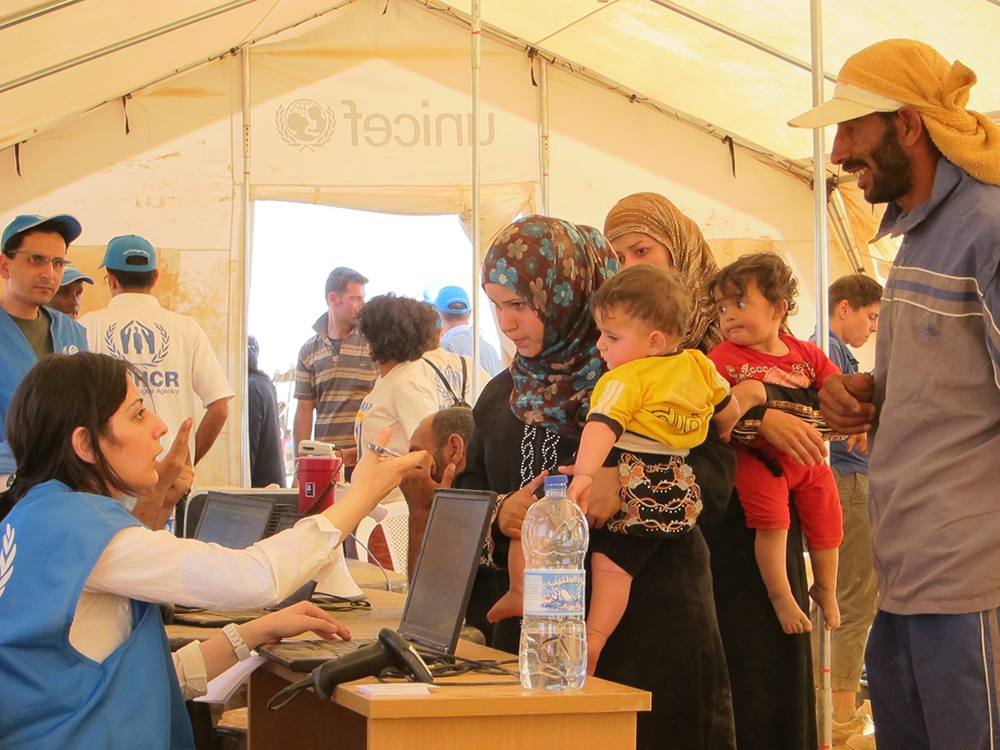 Feras is from Damascus, Syria. A few years ago he left for Germany and lives there since then with his wife. He never lost contact nor his love for the country. Though the last time he entered Syria was not very welcoming: In 2011 he got imprisoned the moment he arrived on the airport and could just return to his family in germany some weeks later with the help of the German embassy. That’s two years ago.

One million Syrian refugees left their country in the meantime – that’s the newest number the UNHCR published in its press release on March 6, 2013, stating that this number has increased dramatically since the beginning of this year. “Over 400,000 have become refugees since January, 2013. They arrive traumatised, without possessions and having lost members of their families.” In Jordan alone, 332.502 Syrians arrived and registered with the UN so far. The Government of Jordan estimates the true number as high as 420,000 Syrians in the country. (http://data.unhcr.org/syrianrefugees/regional.php)

When Feras went to the Zaatari refugee Camp in Jordan, he wanted to realize two ideas he had in mind to help Syrian refugees. But when he arrived there he witnessed shocking circumstances people were confronted with and needed to change his plans.

There are many problems inside the camp, obviously.

In order to enter Zaatari refugee camp as a visitor you need to travel there either Tuesdays or Fridays. There is no bus going there, the taxi from the next village Ramsa takes half an hour and costs 15 Dinar. The bus from Amman goes twice a day to Zaatari, for 25 Dinar, that is 26 Euro. For no apparent reason police at the entrance lets enter five people an hour sometimes, adding up to three hours and more of waiting time. You do need to name the person you want to visit. It is forbidden to make videos or photographs in the camp, except you have the permission of a Jordan authority, of course.

But also as a refugee it’s not that easy to enter sometimes. Alone in one night 1000 new refugees arrived, even though Jordan officially just closed the border for Syrian refugees completely. Some of them waited five days and more until they got finally registered – so before they got any supply, food or blankets.

There are many problems inside the camp, obviously. Opened in July 2012, at least 151.423 refugees are living in the camp by now,  22% of them being under the age of 12. (http://data.unhcr.org/syrianrefugees/settlement.php?id=176&country=107&region=77) Feras witnessed everyday problems for example with the supply of food and basic goods. The area of the camp is wide, so families living at the far end of the camp are often not reached by their supply at all. There is no gas, no electricity, no running water. Water provided by tanks is used for washing once a week. At least the new camp is not sloping down the hill, like the older version, which partly swept away every time it rained. In January there was this very cold week. In one night alone died three children, 70 persons more had injuries from the cold.

People even leave and go back to Syria. They’d rather die by a bomb than by hunger.

The harsh controls at the entrance are supposed to protect the refugees from attacks by different groups of interest. In night time sometimes covered people are seen, women are disappearing, never seen again. The police is reportedly not doing anything against that fact. Some families explain that they got some offers. Charity offers, they are called. But in fact they are offers involving business: a daughter of the family in exchange for help and supply. It is said that these wedding offers mostly come from sheikhs from countries like Saudi Arabia, but also for Jordan men it now is relatively easy to find a suitable Syrian bride among the refugees. Though often enough these girls end up finding themselves forced into prostitution, being married just on paper for some days and sent in a brutal future the next moment. Mr. Hamad said: “They would tell them: ‘we will marry you like this now and then formalise it when we go to Saudi Arabia.’ But then they would leave and change their phone numbers. Many Syrian girls have been impregnated and abandoned in this way.” Guards at Zaatari camp confirmed that they frequently received requests by Arab men, mainly from Jordan or Saudi Arabia, to be given access to the camp so that they could find a “nice young bride”. (http://www.telegraph.co.uk/news/worldnews/middleeast/syria/9821946/Syrian-girls-sold-into-forced-marriages.html)

Jordan authorities want control over refugees not only entering the country, but also while living in the camp. And it is also said that camp authorities want to earn extra money: to leave the refugee camp and live in a village or in Amman, Syrian families need to pay between 200 and 300$. For most of the families that’s not an option. So they don’t have any other choice than staying in the camp, like in a jail.

Syrian citizens are threatened with the perspective to be sent back to the other side of the border, should they disobey. And in fact there are people telling that they did witness cooperations between Jordan authorities and the Syrian secret service: information was shared, people witnessed fire put on tents, poison was used.

But even if you manage somehow to find a place to live in a Jordan village or in Amman, life is not easy to manage with limited money and supply. Food and items of daily use are expensive for Syrians, even when they managed to arrive with some money from Syria. Private people offering help in giving food or medicine for free are scattered around the city of Amman for example, but taxis to reach these places are expensive. Nevertheless more than 120.000 Syrians are trying to survive this way. (http://data.unhcr.org/syrianrefugees/country.php?id=107)

Something beautiful can grow out of a horrible situation

Ferras wanted to realize two projects in and around Zaatari. The garden of freedom was not only supposed to teach children about gardening, to allow the kids to spend the time with something useful, to build a bridge between the Jordan inhabitants in the next village and the Syrian refugees in the camp. It could have also showed that something beautiful can grow out of a horrible situation. But the soil is very poor, the sand is not usable, bringing soil of better quality is too expensive. Another solution must be found for this beautiful idea.

The second idea was to bring wool and yarn into the camp to give persons who feel like the possibility to create scarfs, hats, bracelets and other things in the new “old” colours of Syria: green, white and black with three red stars in the middle stripe. He did bring the material inside the camp. But he did realize quickly as well, that there was already taking off a small business as it seems, traders bringing the produced products to Amman and the villages around to sell them with profit.

Another thing Ferras wanted to check was the container with old clothes from Germany, he sent to Amman in Jordan some weeks ago. But Jordan law forbids the import of old clothes out of fear of pathogens. Before entering every single piece needs to be washed three times, which makes it far more expensive than buying the clothes new in Jordan. Besides Jordan surely needs to protect the internal market in Jordan.

Ferras did find another solution for further help: parcels by post service. So far four out of six have arrived from Germany, including jackets, pullovers, trousers and other warm cloths. Ferras was happy to bring the items from his sister’s new house in Ramcah to the people in need in the camp. Smiling faces are the biggest thank you, making Ferras smile himself.