The story of Firas

Mariangela Sglavo Posted on 14/03/2013 Veröffentlicht in english, GET ACTIVE, get in touch 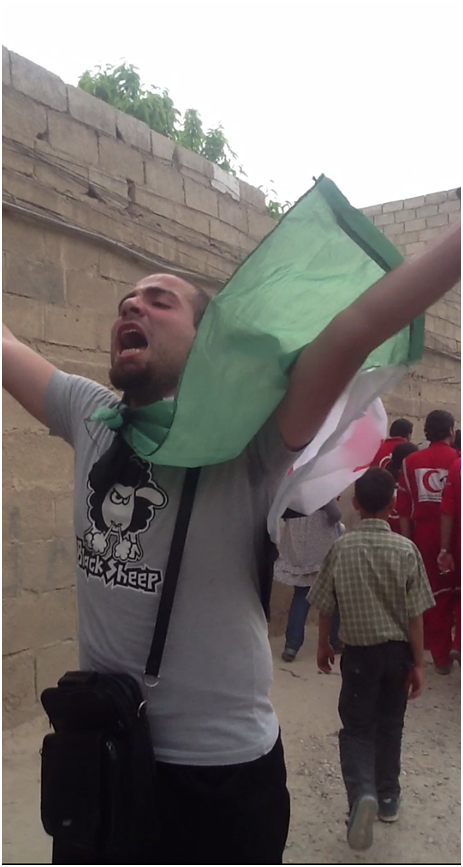 Feras is a young man I met through the Internet. In Syria, his role as an activist and opponent to the government was to organize non-violent demonstrations and publish photos he has taken there on Facebook. For this alone, he was arrested and tortured. In the following text he tells us about his experience. For the sake of his own security, we do not specify his current location.

My name is Firas, I am from Damascus.
I used to teach Arabic as a second language (for non natives) and at the same time study Higher Institute for Arts in Syria; but I was expelled for my peaceful activism and then I was arrested.
Below is a summary about my active role in the revolution.

When the revolution started I was one of the first activists in Damascus. I used to move between Damascus and the suburbs depending on the informations I got about protests and their time and location. I was engaged mainly in Douma, Harasta, Barzeh, Alkaboun, Almidan and Alkadam. After some time, I moved my revolutionary activities to Qudsayya, Alhami and Dummar, then I reached Alzabadani, Madaya and Rankoos.
With time, I moved between different provinces and escorted International journalists in the “hot” regions.
After being chased several times by the security forces, I was arrested for the first time in 11-09-2011 during the Ahmad Baghdadi funeral in Roukneddein in Damascus. I was held for 48 days in the Political Intelligence Department of security in Aljebbih, Damascus. I was tortured; they forced me to confess that I was incited to participate in protests in Damascus. I was released but remained active; I participated in more protests and supported the revolution.
Again, I was arrested arbitrarily in an Alrawda coffee shop with the active journalist I. L., who is Christian, by the Air Force security. I was tortured again by Air Force security in Harasta. They beat, and electrocuted me, putting cigarettes out on my skin. They subjected us to psychological torture and pressure (putting 12 prisoners in a very small cell (1.5 m x 2 m) where we could not move or sleep). After one month and a half, I was released.
For the third time, I was arrested by the military security and sent to jail in Kafarsouseh with the Swiss journalist M. B. while I was escorting him to cover one of the funerals in Kafarsouseh. I was released after two weeks due to health conditions; during this time I was frequently tortured.

Another time, my fourth time, I was arrested in Jaramana on 29-06-2012. The reason behind this arrest is that I am a foreigner because I am originally from Homs. I was tortured by Peoples Committees (Shabiha). They beat me, burning straws and plastic bags on my skin and using electricity in their torture. Then they transferred me to another department of security in al-Jesr al-Bayad. Hafez Makhloof heads this place and it is called The Forty (Ferh el Arbeen). They accused me of belonging to the Free Syrian Army (FSA), committing crimes against the Syrian Army and kidnapping civilians. There I was again brutally tortured, then I was transferred to al-Khatib branch but they rejected me; the main reason is that they did not want me to die at their branch, so I was transferred again, now to the military hospital Harasta. This hospital is more like a torture center than a hospital, even worse than a torture center, because patients are tortured all the time, unlike in a security branch where prisoners are tortured only during the investigation; in the hospital you will be beaten up without reason, for example, a doctor putting out a cigarette in my foot, a nurse kicking me, and a soldier whipping me… I stayed there for 9 days, they were terrible. I witnessed the torture of others and the death of two friends.
I was transferred to al-Khatib Branch where there were thousands of detainees. I was in a cell that contained at least another 450 detainees. We could not breathe, it was very hot, there was no food or water, and it was difficult to use the restrooms. It was psychologically harmful.
After 27 days in al-Khatib, I was transferred to Homeland Security which is also called the General Intelligence Agency. Under torture, they tried to force me to confess that I am enrolled in the FSA and that I have been kidnapping civilians, that was totally not true.
I don’t know anything about this, I don’t know anything about the military, I did not even do the military service yet. All my activism is peaceful, all that I did was protest and ask for my dignity and freedom.
There, despite all torture, I insisted that I did not do any of these charges. Again, I was transferred to the Military justice department that also transferred my case to the civil justice department. I was released after 68 days.
At that time, I was active in Qudsayya and al-Hami, the area where I live. I documented the regime violations in pictures and writings. I worked with a group called, A Syrian Lens
www.syrianlenses.com
At the same time, I was the coordinator, leader and lead singer for the protests in this region.
Also I used my personal facebook page to publish my writings and pictures.
www.facebook.com/firaso00 (THIS PAGE HAVE BEEN DISACTIVATED by FACEBOOK)
I am the administrator of a facebook page the covers the news in my area.
www.facebook.com/e.o.damas
I want to add, my family is known for opposing the regime. My uncle Rafik Hamami, a lawyer, was arrested in the 80’s for 23 years. Also, 3 of my uncles were arrested in Homs. One of them died from torture, Amer al-Shater. My second uncle, Molath al-Shater, was released after 11 months, and finally my uncle Bashar al-Shater is still in prison till now.
The martyrs in my family:
– Abdul Rahman Haddad, my cousin, 9 years old; he was killed by the regime forces in Homs.
www.facebook.com/abd.elrhamn.hadad
– Khaled Alshater, my cousin; he was killed by a sniper in Homs.
www.facebook.com/kaledshater (PAGE DISACTIVETED BY FACEBOOK)

I was recently forced to leave the country after the regime forces attacked Qudsaya. The regime bombarded it violently, and arrested activists.
My house was targeted directly and the reason is that they were sure about my activism and about my uploading videos on youtube and establishing a media center in my house to publish the documented violations.
Now I am a target for the regime forces. I am wanted alive or dead.
The regime forces, also known as Shabiha, burned down my house and destroyed all my past, present and future.
I left the country only because I had to, I did not have any other option. Right now, I don’t have money, job and help.
This is all what I can say now.