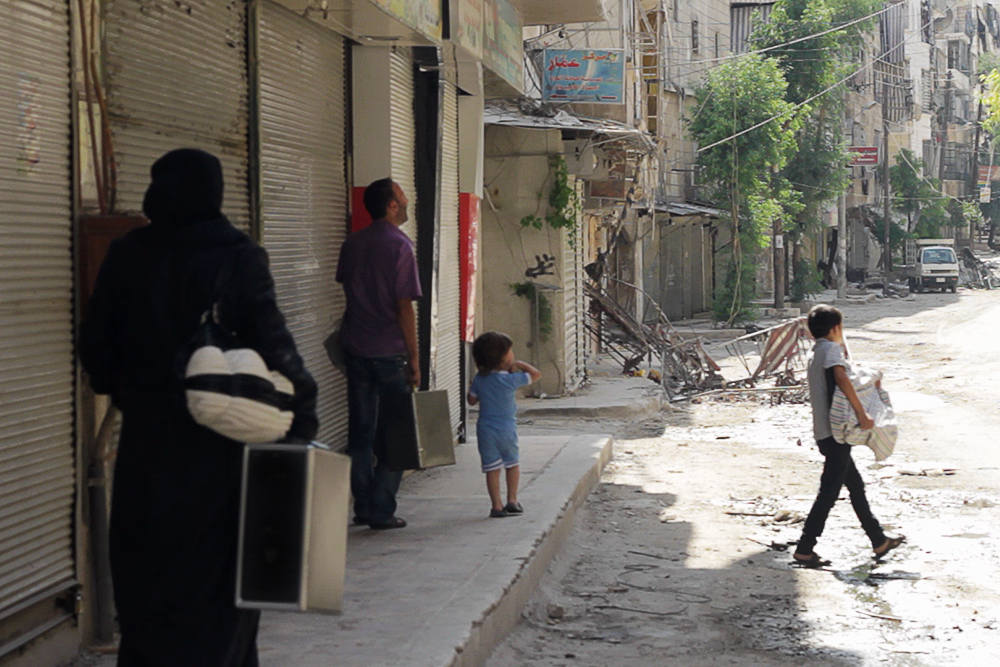 A Syrian friend here in Germany mentioned Mahmoud (name changed) one day some months ago. Living in Damascus, he made incredible efforts to support refugee families coming into his neighbourhood. As the area was closed by checkpoints of the state’s army, Mahmoud explained to me all the dangers he had to endure in order to organise and bring food to the families he was hosting. How would you explain your carrying of big sacks of rice to armed men checking your ID every second day? How would you answer the question: Who are you hiding?

Mahmoud was sitting in a room in his house. On the Skype screen I could see a window at his side. By watching him checking the window every now and then I could be sure to hear the noise of a plane, a helicopter or an explosion the next moment.

At some point in December, there was no way to hide any more. Mahmoud was being hunted down by the regime. He and his family needed to escape. Some days ago they arrived in Lebanon, without any money left and no place to go. They themselves are refugees now.

Listen to what he says

In the beginning of 2013 the UNHCR published the official numbers of Syrian refugees in the surrounding countries: 638,286 people. By January 15 there were 206,666 of them in Lebanon.

By the beginning of March the total number of Syrian refugees crossed the line of 1 Million – 336,997 of them escaped to Lebanon!

“With four registration centres across Lebanon, the UNHCR registers approximately 1,500 refugees daily, and is continuing to increase its capacity in response to this great need. Newly arrived, unregistered families continue to be assisted by the UNHCR and its partners. UNHCR offices throughout the country are working closely with local municipalities and other local figures to reach the most vulnerable unregistered refugees. With the cooperation of these local figures like Dar el Fatwa in Bekaa and the heads of Municipalities in Dinneh in north Lebanon, the UNHCR is providing unregistered vulnerable families with winter items, such as blankets, mattresses and kitchen sets.” (UNHCRWeeklyUpdate-2013-01-04)

In countries like Lebanon, life for Syrian refugees is hard. Food is very expensive and living room is rare. So many people need support, a situation Lebanese people can’t afford to deal with alone. Even the UN has problems supporting all the refugees coming from Syria: they can register them but often need to explain at the same time that there is nothing more they can do right now, while waiting for supply themselves.